Twitter broke the news that rapper Lil Boosie was FINALLY set free from prison. After roughly 5 years in jail... Boosie is finally home! His friend, Webbie predicted he was coming home in his Breakfast Club interview. Here's the TMZ report: 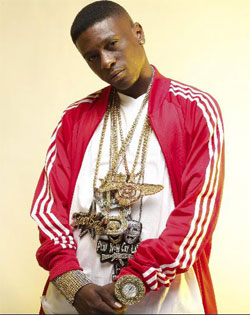 "Lil Boosie is a free man ... the rapper has just been released from a Louisiana State Penitentiary where he's been locked up since 2009 on drug charges.

31 year old Boosie -- real name Torrence Hatch -- was intitially locked up on a marijuana charge in '09 -- but during his stay, he was busted attempting to smuggle drugs into prison -- so a judge tacked 8 years on to his original 4 year sentence.

But Boosie caught a break and has been released early.  A rep for the penitentiary has told the media Boosie will be on parole until 2018."

I'm not exactly the "Lil Boosie" fan. but nonetheless Welcome Home!
Posted by THE MOTHER DIVA at 11:41 PM